Athenian Democracy: The Birth of Philosophy 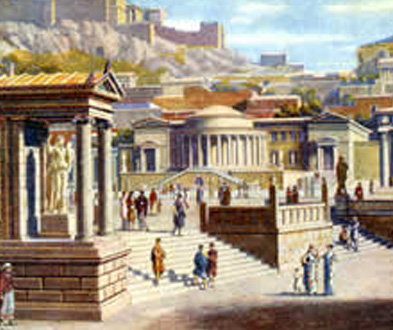 “A second conflagration now consumed all Hellas, in particular the city of Athena, and this was the blaze of boldness and self-assurance. The hand of heaven, it seemed, had set itself in benediction upon each man’s shoulder, banishing all timorousness and irresolution. Overnight, the Greeks had seized the stage of destiny. They had defeated the mightiest army and navy in history. Would lesser undertaking could now daunt them? What enterprise could they not dare?” ~ Steven Pressfield

Pressfield is discussing the magnificent and hard-fought victory over the gargantuan Persian military in about 500 B.C.E. It ushered in an era of unprecedented progressivism and political change in the ancient city Athens. Athenian democracy is one of the most remarkable and interesting lights in a long and often-dark stretch of highway symbolizing humankind’s ascension to our current (dubious) heights. One of its strengths was the gradual but significant transfer of power to the people: the demos.

It wasn’t perfect, but during much of Athens’ history, it was pretty remarkable. In the Classical Age and Periclean Athens, much public art was commissioned, law was improving and becoming notable for such an early era, and Athens was growing economically. Socrates had yet to make his debut because the city-state was relatively prosperous, functional, progressive, and justifiable. Slowly, unfortunately – tragically – the polis began to degrade, and its dark aspects overtook its shining virtue. However, it essentially kicked off Western civilization – with all its glories and failures. It was certainly a remarkable time and place, not the least of which for its nascent philosophy.

Athenian democracy has informed us throughout the ages. What those 40,000 free men did was unique in the history of the world. It was rife with contradictions, limitations, and obfuscations, but it was a seed that are visible in the best impulses of America. We must try to glean its strengths and mitigate its weaknesses in this precious world of 7 billion people if we are to survive – let alone thrive. Long live the idea of Athenian democracy! I now present you with a number of intriguing quotations relevant to Athenian democracy. Sit awhile and think!

“When Athens ceased to be creative and experimental (it didn’t just rest on its laurels; it discarded them), when it closed in on itself and no longer cared to grow and change, it attained a static type of stability. Athens, in the end, became a society at rest, a society extinguished.”~ Christopher Phillips

“To the Athenians of the Golden Age, women were inferior creatures, only dubiously superior to domesticated animals, and with nothing in the way of human rights. To these cultivated Athenians, it seemed virtually self-evident that male homosexuality was the highest form of life, because that was the only way in which a male could love an equal.” ~ Isaac Asimov

“The city of Athena was the only truly open city in Hellas, her freest and most civilized. The love of wisdom, philosophia, was esteemed in Athens beyond all other pursuits; the life of the mind was cultivated and honored, invigorated by a high culture of theater, music, poetry, architecture, and the arts. Nor were the Athenians inferior to any city in Hellas in the practice of war.” ~ Steven Pressfield

“When the freedom they wish for most was the freedom from responsibility, then Athens ceased to be free and never was free again.” ~ Edith Hamilton

“Plato, who created the Socratic dialogues that have so deeply influenced Western culture, makes no secret of his dislike for all forms of ‘sophistry’ – not to mention the Sophists that prowled the streets of Ancient Athens teaching what they called ‘wisdom’ for a price.” ~ Gary E. Kessler

“Athens was more democratic than Sparta, but this did not affect its addiction to warfare, to expansion into other territories, to the ruthless conduct of war against helpless peoples.” ~ Howard Zinn

“The conventional tendency to cast individualism as the enemy of community and culture rests on a profound misunderstanding.” ~ Nathaniel Branden

“When we think of states that try to promote virtue, we don’t think first of the Athenian polis; we think rather of religious fundamentalism, past and present—stonings for adultery, mandatory burkas, Salem witch trials, and so on.” ~ Michael J. Sandel

“Athens was not just the cradle of democracy, the creator of magnificent architectural and engineering feats, and the source of humanistic and realistic depiction of the human face and body in sculpture as rendered by Phidias and his followers. It also fostered the creation of intellectual traditions that we know today as ‘Western philosophy.'” ~ Nancy C. Andreasen

“Times of war are crucial moments for the survival of democracies. Giving up too much power to secretive leaders can end up doing more harm than the enemy. That’s what happened to the first recorded democracy ever, in Ancient Athens. After flourishing for nearly 200 years, their democracy was taken over from within by its own most prominent civic leaders.” ~ Mary Liz Thomson

“The Athenians treasured the democratic character of the polis, and a philosopher could well expect trouble when challenging its core precepts. Socrates raised grave questions about such precepts. Suppose for argument’s sake that the polis contained 11,000 people — of whom 10,994 are certifiable fools and six are wise men!” ~ Daniel N. Robinson

“Was Athens – or Greece itself – destroyed by the Peloponnesian War? An entire industry of classical scholarship once argued for postwar Hellenic ‘decline,’ and the subsequent tide of fourth-Century poverty, social unrest, and class struggle as arising after the war. Victorians, in turn, felt the loss was more a ‘what might have been,’ a conflict that had ended not just the idea of Athens but ‘the glory that was Greece’ itself and the Hellenic civilizing influence in the wider Mediterranean.” ~ Victor Davis Hanson

“It is painful to record that Athenian civilization, the most democratic of the ancient world, prevented free inquiry that seemed to conflict with religion and persecuted some of its profoundest minds.” ~ Corliss Lamont

“[Ancient] Athens was not the place where one came to make one’s mark as a progressive, organic being, defining oneself a new, concealing a lackluster past, or parlaying one’s talents into sources of wealth and standing. The Renaissance, however, embodies this idea of progress: Depending on one’s initiative, one’s life, the matter where it begins, can end in a different place.” ~ Daniel N. Robinson

“In meeting the accusation that he had corrupted the youth of Athens, Socrates did not for a moment assume an apologetic air, but with courageous faith in the worth of philosophy set forth the principles by which he governed his life.” ~ Frank N. Magill

For more quotes having to do with philosophy, Ancient Greece, Western civ, intellectual history, and other ties to Athenian democracy, visit The Wisdom Archive and poke around! It’s vast, spectacular, and free.

For a modern look at democracy and progressivism, visit Demos.

For historical perspective, try this link.

Wisdom: From Whence Does it…