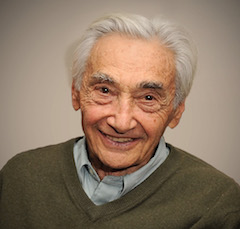 Happily for him, my man Howard Zinn never lived to see Donald Trump ascend to the throne. He was no stranger to demagogues, self-serving hypocrites, and pretenders – for he fought Hitler (like, literally), was a leader in the Civil Rights movement, and every morning had to read the papers while George W. Bush, Ronald Reagan, and Lyndon Johnson were president. He fought the good fight for decades. Finally, his body gave out. But his mind, during most of his long life, was strong, adroit, and productive. Here are some Howard Zinn quotes (and some allied others) to help us all deal with the topsy-turvy political times. He would want us to look to wise guides and find within ourselves the strength to resist, to organize, and to non-violently protest. If he were alive today, he would say that we will prevail.

One of my favorite Howard Zinn quotes is: “Small acts, when multiplied by millions of people, can transform the world.” He also killed it with the following: “We are not politicians, but citizens. We have no office to hold on to, only our consciences, which insist on telling the truth.” He is actually so quotable, I had about 250 of his quotations, remembrances, and positions to choose from – this blog was like catching fish in a barrel. I can hear his voice now, as he read from his book A People’s History of the United States in the wonderful documentary, You Can’t Be Neutral on a Moving Train: “I start from the supposition that the world is topsy-turvy; that things are all wrong; that the wrong people are in jail, and that the wrong people are out of jail; that wrong people are in power, and that the wrong people are out of power.” And can one get any more inspirational and heartfelt than this: “I want to point out that people who seem to have no power, whether working people, people of color, or women – once they organize and protest and create movements – have a voice no government can suppress”? He was a mensch, a mountain, and people of goodwill are so sad he is gone.

Here are two very interesting thoughts (rather than Howard Zinn quotes, they are quotes about Howard Zinn!): “There are, from time to time, people who can crystallize the aims or goals of a movement in an especially compelling way. Who can rally greater numbers of people to take a particular action or, in the case of Howard Zinn, make a lifelong commitment to activism. But such people cannot substitute for a movement” ~ Anthony Arnove. As well: “He’s gone. Gone, now, just when we need him the most. But his whole life he has been pointing us in the right direction. Don’t be impressed by the men in suits. Don’t listen to the pseudo-scientific babble of the high priests of the economy. Take things in your own hands, work for what’s right, make a bold move in the direction of the common good. It’s you and me who have to get up front and grab the wheel. We have to do it now – we have no time to waste“~ David Kristjanson-Gural.

The one thing they [the radical right] loathe more than liberals is the truth. And the quickest way to be damned by them as liberal is to tell the truth. ~ Bill Moyers

The arm of the moral universe is long, but it bends toward justice. ~ Martin Luther King, Jr.

Is it unpatriotic to want peace? Isn’t it possible that it’s profoundly pro-American to hope that our armed forces aren’t sent to fight what one believes in an immoral and unjust war? ~ Alan Colmes

Everything’s okay in the end. If it’s not okay, it’s not the end.~ Carolyn Myers

Solidarity is quite dangerous; from the point of view of the masters, you’re only supposed to care about yourself (and not about other people). This is quite different from the people they claim are their heroes, like Adam Smith, who based his whole approach to the economy on the principle that sympathy is a fundamental human trait. …It’s taken a lot of effort to drive these basic human emotions out of people’s heads, and we see it today in policy formation — for example, in the attack on Social Security, which is based on the principle of solidarity — caring for others. ~ Noam Chomsky

No one has a right to sit down and feel hopeless. There’s too much work to do. ~ Dorothy Day

When I dare to be powerful – to use my strength in the service of my vision, then it becomes less and less important whether I am afraid. ~ Audre Lorde

If the test of patriotism comes only by reflexively falling into lockstep behind the leader whenever the flag is waved, then what we have is a formula for dictatorship, not democracy. ~ Michael Parenti

Without significant and widespread changes, our global system could collapse into chaos. But a wave of new thinking and action it inspires offer us hope for a global breakthrough that would create a better world for ourselves and our children. ~ Ervin Laszlo

Justice of right is always to take precedence over might. ~ Barbara Jordan

I hope you are finding these progressive thoughts inspiring. I know you are waiting for the Howard Zinn quotes, so without further ado, I present them:

“What do I do when pessimism strikes? I get together with other people. I’m encouraged when I get together with other people who feel the way I do about things, and I realize I’m not alone. Or I’ll turn to the arts. The great poets and the writers were almost always progressive people who saw beyond the politics. So I’ll read Mark Twain and Helen Keller and Upton Sinclair and Tolstoy and Thoreau. I’ll read things that are encouraging and uplifting.”

“What is important is how closely we look today at what is done to human beings, what criteria we use for “progress.” We are accustomed to measuring the state of the nation by the numbers on the stock market rather than by how many children die of malnutrition.”

“There should be clues to the rightness of the ends we pursue by examining the means we use to achieve those ends. I am assuming there is always some connection between ends and means.”

“The common moral sense of people … bubbles up, and at certain points in history, brings about victories that may be small, but carry large promise.”

“The answer is to create centers of power which are outside of the official political mechanism, and which exert their own energy on the social structure and the political structure of the nation.”

“As soon as you speak outside the boundaries, as soon as you say things that are different from what the establishment, the media, and leading intellectuals are telling you to say, the question of your patriotism arises.”