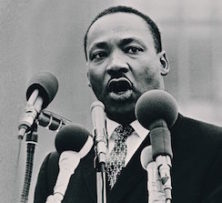 I was watching the Superbowl tonight, and was really moved by a wonderful quote by Martin Luther King, Jr. It got me thinking about what a powerful leader he was, how many obstacles he faced, and how educated he was. I would imagine that 24 out of 25 Americans know at least a little something about the reverend, and that is saying a lot, considering our spotty record of educating our youth here in America. There are many powerful, interesting, and wonderful Martin Luther King, Jr. quotes, and I present a couple dozen of my favorites, and connect them to the virtues the quotation represents.

“We are prone to judge success by the index of our salaries or the size of our automobiles rather than by the quality of our service and relationship to mankind.”

“Life’s most persistent and urgent question is, ‘What are you doing for others?’”

“Perhaps the more tragic recognition of reality took place when it became clear to me that the war was doing far more than devastating the hopes of the poor at home. It was sending their sons and their brothers and their husbands to fight and to die in extraordinarily high proportions relative to the rest of the population.”

“Injustice anywhere is a threat to justice everywhere.”

“I have a dream that one day…my four little children will one day live in a nation where they will not be judged by the color of their skin but by the content of their character.”

“America, the richest and most powerful nation in the world, can well lead the way in this revolution of values. There is nothing except a tragic death wish to prevent us from reordering our priorities so that the pursuit of peace will take precedence over the pursuit of war.”

“True peace is not merely the absence of tension but is the presence of justice and brotherhood.”

“Our scientific power has outrun our spiritual power. We have guided missiles and misguided men.”

“If humanity is to progress, Gandhi is inescapable. He lived, thought and acted, inspired by the vision of humanity evolving toward a world of peace and harmony. We may ignore Gandhi at our own risk.”

“Nobody with any sense likes to go to jail. But if he puts you in jail, you go in that jail and transform it from a dungeon of shame to a haven of freedom and dignity!”

“Success, recognition, and conformity are the bywords of the modern world, where everyone seems to crave the anesthetizing security of being identified with the majority.”

“I was rather disappointed that fellow clergymen would see my nonviolent efforts as those of an extremist.”

“One has a moral responsibility to disobey unjust laws.”

“Nonviolent direct action seeks to create such a crisis and foster such a tension that a community which has consistently refused to negotiate is forced to confront the issue. It seeks to dramatize the issue so that it can no longer be ignored.”

“The nonviolent approach does not immediately change the heart of the oppressor. It first does something to the hearts and souls of those committed to it. It gives them new self-respect; it calls up resources of strength that they did not know they had.”

“In the End, we will remember not the words of our enemies, but the silence of our friends.”

“An individual who breaks a law that conscience tells him is unjust, and who willingly accepts the penalty of imprisonment in order to arouse the conscience of the community over its injustice, is in reality expressing the highest respect for the law.”

If you enjoyed reading these quotations by Martin Luther King, Jr., try searching for your favorite keywords, authors, or values in the incomparable Wisdom Archive, a searchable quotations database. Yours to use, free.

Here is an external site that features quotes about service.