Quotes That Clarify the Cardinal Virtues 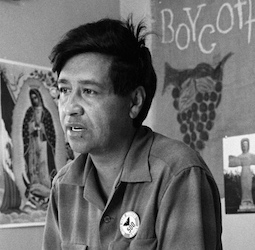 Cesar Chavez: Fortitude for Sure

Have you heard the phrase the cardinal virtues? This is how Wikipedia describes their early beginning: “Plato identified the four cardinal virtues with the classes of the city described in The Republic, and with the faculties of man. Plato narrates a discussion of the character of a good city where the following is agreed upon. “Clearly, then, it will be wise, brave, temperate [literally: healthy-minded], and just.” (427e; see also 435b) Temperance was common to all classes, but primarily associated with the producing classes, the farmers and craftsmen, and with the animal appetites, to whom no special virtue was assigned; fortitude was assigned to the warrior class and to the spirited element in man; prudence to the rulers and to reason. Justice stands outside the class system and divisions of man, and rules the proper relationship among the three of them.” This blog examines the cardinal virtues from a transcultural and temporally-unlimited perspective.

Another good introduction to this scheme is from Scott P. Richert: “The cardinal virtues are the four principal moral virtues. The English word cardinal comes from the Latin word cardo, which means ‘hinge.'” He continues: “…the cardinal virtues … entered into Christian teaching by way of Plato’s disciple Aristotle. Unlike the theological virtues, which are the gifts of God through grace, the four cardinal virtues can be practiced by anyone; thus, they represent the foundation of natural morality.”

What is virtue? Is it one thing are many? Are justice, holiness, and temperance separate virtues or part of virtue as a whole? It makes a difference because if they’re separate, it should be possible for a person to be, for example, just but intemperate, or holy but unjust. ~ Daniel N. Robinson

Andrea Bennett points out that: “As a philosopher, [Paul] Bloomfield [In his book The Virtues of Happiness] defends virtue ethics, an approach inspired by the ancient Greeks that focuses on moral character. Here, the cardinal virtues — courage, justice, temperance, and wisdom — are meant to guide our decision-making processes. They also provide one set of criteria: a person who possesses these qualities might be considered objectively ‘good.'” She cites two different virtues than those I first discovered when researching this topic. Obviously, I appreciate the addition of courage and wisdom, but I can’t say which are the traditional four.

Aristotle believed that prudence was recta ratio agibilium, “right reason applied to practice.” It is, essentially, the ability to have a well-tuned and ever-ready sense of mental acuity, care, concern, and diligence, if you will. Richert believes that prudence is how we distinguish right from wrong, good from bad, and make moral decisions. As Richert puts it, “Disregarding the advice or warnings of others whose judgment does not coincide with ours is a sign of imprudence”, and so I give you five quotations about prudence that assist us in seeing the good and avoiding the bad:

“The prudent man determines and directs his conduct in accordance with this judgment. With the help of this virtue we apply moral principles to particular cases without error and overcome doubts about the good to achieve and the evil to avoid.” (Catholic Church teachings)

“The prudent man does himself good; the virtuous man does good to others.” ~ Voltaire

“Prudence is waiting until all the votes are in before embarking on a course of action. Prudent individuals are farsighted and deliberative. They are good at resisting impulses about short-term goals for the sake of longer-term success.” ~ Martin E. P. Seligman

“We have heard enough about being practical and efficient and prudent. We heard it preached through several decades that these things would save the world. I think that, with the salty taste of blood and sweat on our lips, we are learning that we had best talk once again about what is right.” ~ Ellis Arnall

“It is the virtue that allows us to judge correctly what is right and what is wrong in any given situation. When we mistake the evil for the good, we are not exercising prudence — in fact, we are showing our lack of it.” ~ Scott P. Richert

He will not so much say his lessons as do it. He will repeat it in his actions. We shall see if he shows prudence in his enterprises, if he shows goodness and justice in his conduct, if he shows judgment and grace in his speaking, fortitude in his illnesses, modesty in his games, temperance in his pleasures, order in his economy. ‘Who makes his learning not a display of knowledge, but the law of his life; who obeys himself and submits to his own injunctions’ (Cicero). The true mirror of our discourse is the course of our lives. ~ Michel de Montaigne

Justice is one of the truly significant concepts, values, and aims of individuals and societies. Typically, justice refers to a right apportioning or a proper desert (“deservingness”). Someone is getting their due, either in a distributive way (i.e., who gets what in a society) or a retributive one (i.e., how are those who transgress against social norms and laws made to pay for doing so). The Modern Catholic Dictionary defines justice as “the constant and permanent determination to give everyone his or her rightful due.” In a word, if someone gets what they deserve, they are seeing justice in action. How it is determined what one is due is, of course, a matter of debate. Five quotes about justice that cover a wide range include the following (and more about the cardinal virtues can be found in The Wisdom Archive):

“I can accept neither the necessity nor the wisdom of federal mandatory minimum sentences.” ~ Anthony Kennedy

“You might imagine, from a comfortable distance, that people who live, year in and year out, on $6-$10 an hour have discovered some survival stratagems unknown to the middle class. But no.” ~ Barbara Ehrenreich

“Each person possesses an inviolability founded on justice that even the welfare of society as a whole cannot override. For this reason, justice denies that the loss of freedom for some is made right by a greater good shared by others. It does not allow that the sacrifices imposed on a few are outweighed by the larger sum of advantages enjoyed by many.” ~ John Rawls

“Men’s ambition and their desire to make money are among the most frequent causes of deliberate acts of injustice.” ~ Aristotle

Plato’s dialogues (in which the idea of hypothesis originated) in general are complex definitions and testings of single ideas like ‘temperance,’ ‘virtue,’ and ‘justice.’ ~ Robert Grudin

Temperance is, according to Richert, “the restraint of our desires or passions. Food, drink, and sex are all necessary for our survival, individually and as a species; yet a disordered desire for any of these goods can have disastrous consequences, physical and moral.” Associated with this concept is the classic, Aristotelian idea of “the golden mean”. This is a concept typically applied to ethics, wherein as one example, courage is the “mean” or the middle-ground between two extremes on either end: cowardice (a defect in courage) and rashness (an excess of it). Five quotes about temperance were found in The Wisdom Archive that may elucidate this idea:

“Wise men, though all laws were abolished, would lead the same life.” ~ Aristophanes

“It is a characteristic of wisdom not to do desperate things.” ~ Henry David Thoreau

“FRUGALITY and TEMPERANCE first attract our attention. These simple but powerful virtues are the sole foundation, on which a good government can rest with security. They were the virtues which nursed and educated infant Rome, and prepared her for all her greatness. But in the giddy hour of her prosperity, she spurned from her the obscure instruments, by which it was procured; and in their place substituted luxury and dissipation. The consequence was such as might have been expected. She preserved, for some time, a gay and flourishing appearance; but the internal health and soundness of her constitution were gone. At last she fell, a victim to the poisonous draughts, which were administered by her perfidious favorites. The fate of Rome, both in her rising and in her falling state, will be the fate of every other nation that shall follow both parts of her example.” ~ James Wilson

Both Plato and Aristotle criticize the constitution of Crete and Sparta for making war the end of the state and exalting courage, which is only a part, above “the whole of virtue.” Courage must be joined with the other virtues to make a man good, not only as a citizen but as a man. “Justice, temperance, and wisdom,” says the Athenian Stranger in the Laws, “when united with courage are better than courage only.” ~ Robert Maynard Hutchins

Last of the cardinal virtues is fortitude. This is essentially a synonym for courage, I believe. The poet Maya Angelou believes that fortitude is not just one of a hundred values human beings cherish, but perhaps the keystone of them all. She says, “One isn’t necessarily born with courage, but one is born with potential. Without courage, we cannot practice any other virtue with consistency. We can’t be kind, true, merciful, generous, or honest.” I end with five fortitude quotes, and more can be found by searching keywords diligence, dedication, endurance, perseverance, and courage in The Wisdom Archive.

“The courage we need is not the fortitude to be obedient in the service of an unjust war, to help conceal lies, to do our job for a boss who has usurped power and is acting as an outlaw government. It is the courage at last to face honestly the truth and reality of what we are doing in the world and act responsibly to change it.” ~ Daniel Ellsberg

“Fortitude enables us to do what is right in the face of difficulty. The right decision in life is often the hard one.” ~ Thomas Lickona

“It is the sort of courage which goes with physical strength, with fears of endurance; and, as signified by the root-meaning of “fortitude,” which is a synonym for courage, it is a reservoir of moral or spiritual strength to sustain action even when flesh and blood can carry on no further. Such courage is a virtue in the primary sense of the Latin word virius—manliness, the spirit, or strength of spirit, required to be a man.” ~ Robert Maynard Hutchins

More quotes about the cardinal virtues (and many other values) can be found by searching for free in The Wisdom Archive, a 33,000-quote database that is of grand proportions.