Baseball Historian Rick Swaine describes “Campy” thusly: “Roy was also tough as nails. As a Negro Leaguer [the first African American major-league catcher], he was purported to have once caught four games in one day – an early doubleheader in Cincinnati and a twi-nighter in Middletown, Ohio. He endured repeated injuries to his fingers, hands, and legs – occupational hazards of working behind the bat – but in his last appearance he established a since-broken major-league record for durability by catching at least 100 games in nine straight seasons…. The popular catcher was often described as gentle, unassuming, jovial, and full of life. He was a cheerleader, almost childlike in his enthusiasm.”

He had a 10-year career with the Brooklyn Dodgers in the 1940s-1950s – an epochal time in America’s pastime. All in all, he played with gusto and joviality, and was a remarkable player.

Swaine continues: “However, the Hall of Famer’s career was cut short and his life forever altered by a tragic automobile accident which severed his spinal cord. He was henceforth resigned to live the life not of a pro baseball player, but a quadriplegic.

The Baseball Hall of Fame website describes the end of his career in such terms: “Shortly after 1:30 a.m. on Jan. 28 of that year, however, Campanella lost control of a rented car on a patch of ice on an S-curve in Long Island, N.Y. Campanella suffered a broken fifth vertebra in his back, costing him almost complete use of his body below the shoulders.”

Being so gravely paralyzed would be difficult enough for a physicist, chess player, or blogger. However, for a world-class catcher on the legendary Dodgers who had recently won the world series, this could be considered a fate worse than death.

Philip Quarles tells thisstory of Campanella speaking at an event for authors in 1959, sharing his new book It’s Good to Be Alive. The whole thing reads like one lengthy inspirational quote :

“Now a quadriplegic, he addresses a hushed audience, telling how difficult it is having to ask his six-year-old daughter for a glass of water or to try and eat while lying down. He frankly relates how devastated he still is, warning, “It’s what you tell your own self” that determines if you will survive such an experience. He describes many people in the rehabilitation center as not wanting to live, being unwilling to go home because they feel they have no future there. He encourages youngsters who seem to have no hope, telling them, ‘It’s just good to be alive, even if you can’t do nothing!’

Although he does talk about faith, and tells a moving story about reciting The Lord’s Prayer during his first night in the hospital, Campanella does not offer any saccharine prescriptions for overcoming adversity. Rather, his message is one of plain-spoken strength. Surprisingly, he does not mention baseball until the end of his talk, crediting it for giving him a livelihood and teaching him how to be a gentleman. But his final thoughts, though perhaps bleak, are also inspiring. ‘It’s not a real tough story. It’s something that has happened in life.’ Finished, he is greeted with tumultuous applause.”

Neil Lanctot’s book on the legend features this interesting, long-winded, but heartwarming page (hyperlinked to Amazon.com):

The following are Campanella’s words about his experience visiting the rehab institute and seeing the inspirational quote on the wall that brought him to tears:

“We’re a rugged breed, us ‘quads’. If we weren’t, we wouldn’t be around today. Yes, we’re a rugged breed; in many ways, we’ve been blessed with a savvy and spirit that isn’t given to everybody. And let me say that this refusal of total or full acceptance of one’s disability all hooks up with one thing – faith, an almost divine faith.

Down in the reception room of the Institute of Physical Medicine and Rehabilitation, over on the East River at 400 East 34th Street in New York City, there is a bronze plaque that’s riveted to the wall. During the months of coming back to the Institute for treatment – two and three times a week – I rolled through that reception room many times, coming and going. But I never quite made the time to pull over to one side and read the words on that plaque that were written, it’s said, by an unknown Confederate Soldier.

Then one afternoon, I did. I read it, and then I read it again. When I finished it the second time I was near to bursting – not in despair, but with an inner glow that had me straining to grip the arms of my wheelchair. I’d like to share it with you.”

“A Creed For Those Who Have Suffered”

This poem really speaks to me. It is about meaning, overcoming adversity, strength, and development. I, too, have hoped for a life that was free of pain, sorrow, setbacks, loss, insecurity, and weakness. I am a perfectionist, and everything is some shade of “less than ideal” or “somewhat imperfect.” I am reminded that though we may wish to be happy, healthy, wealthy, and wise, if we were, we would probably lack the character, insight, empathy, and meaning that can shape us into better, stronger, richer, deeper individuals.

I thought about an inspirational quote from the 4th season of the remarkable show Star Trek: The Next Generation. The main character, Captain Picard, had just been put through an amazing opportunity to relive his past (by an omnipotent being named “Q”), and he changed one little thing and it drastically altered the rest of his life. His future (present?) was dramatically changed because once he began to try to tidy up and truncate his experiences, he was really no longer the same man thirty years hence. The chastened Captain Picard reflects on his 72-hour, metaphysical odyssey in the following way:

“There are many parts of my youth that I’m not proud of. There were loose threads – untidy parts of me that I would like to remove. But when I pulled on one of those threads, it unraveled the tapestry of my life.”

Here is a story that I remember hearing told to this day. I was 18, and am now 44. It made a big impact.

Below is an amazing “baseball card” that is essentially a pictorial inspirational quote. I am absolutely sure it inspired a handicapped child or two in the 1950s and 1960s.

Here is a tribute to Campanella from an external site: CLICK HERE

I wrote a blog not about a life-altering injury providing meaning in life, but death. Read it HERE.

Let me end by showing you an inspirational quote by fellow African-American, writer James Baldwin. Think about what he is saying for a minute or two and it will be the most productive moment in your day, I can virtually assure you. 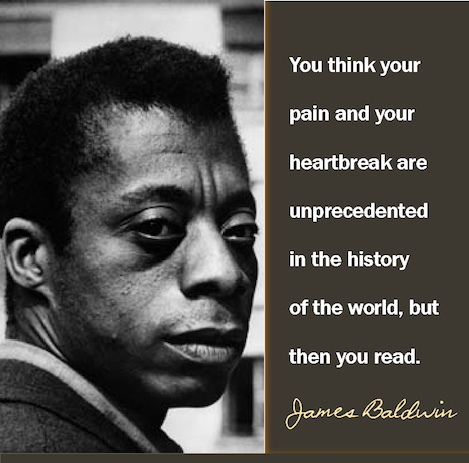