Self-Improvement Has Much to Do with Values 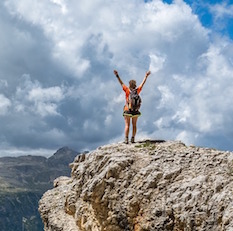 The concept has many names: personal growth, self-help, psycho-emotional development, self-improvement, self-growth, etc. They can have a slightly “cheesy” ring to them, but much has been written about them (and there is a huge audience for this kind of material). In this blog, I will share some opinions I have about what self-improvement (or whatever name you want to use) is really about. Many inspiring quotes about personal growth will be presented. This piece should encourage the reader toward higher levels of psychological, spiritual, moral, and philosophical development to come to believe that self-improvement has much to do with values.

There really are only a couple major belief systems when it comes to personal growth and the improvement of the self. One would be to pray for it. According to this perspective, God gives you strength, God communicates to one through signs and actions, and you ask for what you want. God will provide, God works in mysterious ways, and everything happens for a reason. This, clearly, places the locus of control well outside the self, and thus, is incompatible with the humanistic and rational-scientific worldview. One has to either believe that one is a capable and responsible factor for positive change, or that a god is, but both doesn’t really seem possible. In my own personal opinion, that is.

Locus of control means this, according to a website called ChangingMinds.org: “People with a high internal locus of control believe in their own ability to control themselves and influence the world around them. They see their future as being in their own hands and that their own choices lead to success or failure.” Thus, there is no room for appeasing, obeying, and interpreting a supernatural being in this worldview. Thus, I am only going to concentrate on the idea that self-improvement has much to do with values, not saying the right things or being a good Christian. Personal values. Beliefs one holds about the self.

Most of the important things in the world have been accomplished by people who have kept on trying when there seemed to be no hope at all. ~ Dale Carnegie

When I write values, I mean   Consider this quote by John F. Kennedy: “Conformity is the jailer of freedom and the enemy of growth.” Can you easily see how that refers to values, and interpersonal, humanistic ones at that? This does demonstrate to some degree my thesis that self-improvement has much to do with values because how can one change, grow, or positively develop if they are a hopeless conformist? To do what others, society, parents, pastors, Facebook friends, or a god wish one to do is not personal growth, it is supplication and obeisance and social conformity. VeryWellMind has this to say about conformity: “[it] involves changing your behaviors in order to ‘fit in’ or ‘go along’ with the people around you. In some cases, this social influence might involve agreeing with or acting like the majority of people in a specific group, or it might involve behaving in a particular way in order to be perceived as ‘normal’ by the group.

It would be like catching fish in a barrel to find quotes about personal power, self-confidence, and assertiveness; in other words, the belief that one doesn’t need to “be perceived as ‘normal’ by the group” [one belongs to] to succeed, flourish, and grow. Here are just two:

“We forfeit three-fourths of ourselves to be like other people.”~ Arthur Schopenhauer

“Do not go where the path may lead, go instead where there is no path and leave a trail.” ~ Ralph Waldo Emerson

So I am talking about the values of self-confidence, internal locus of control, and an inner-directedness that guides one, not the reference group. I’m not even necessarily talking about things written by others; quotes or whatever. Nay, I believe that self-improvement has much to do with values, and I mean beliefs and self-perceptions and goals one has. Personal values.

“Courage,” Maya Angelou wrote, “is the most important of all the virtues, because without it we can’t practice any other virtue with consistency.” She also believes that “Courage allows the successful woman to fail – and learn powerful lessons – from the failure – so that in the end, she didn’t fail at all.” The gifted poet and is connecting a value or virtue (courage) with positive outcomes (not failing, or succeeding).

Have you heard the quote that we make our own luck? Gifted writer and drummer Neil Peart wrote: “We draw our own designs; but fortune has to make that frame.” Indeed, tens of thousands of Rush (the rock group) fans love these lyrics written by “The Professor,” Neil Peart, because they extol the virtue of willingness to risk:

We go out in the world and take our chances
Fate is just the weight of circumstances
That’s the way that lady luck dances
Roll the bones!

“Rolling the bones” means to take a shot, to throw the dice, to see what you got! To go for it. That’s a wonderful stanza; you can concentrate on it for an hour if you wanted and it wouldn’t lose its luster. Yes, from what I know of Neil Peart and other extremely high-achieving individuals, he would agree that self-improvement has much to do with values.

The ideals that have lighted my way have been kindness, beauty, and truth. ~ Albert Einstein

In fact, you can’t really propel yourself forward if you don’t have the engine of values. How would you know where you want to go, and how could you possibly get there without them?

Show me a person who is notable for their success who doesn’t link that achievement with their ingenuity, their passion, their creativity, their love, their vision, their character, their originality, or their persistence. It won’t happen. All those who achieve much and really master personal growth and psycho-emotional development (or even, say, invent the lightbulb or fly across the Atlantic Ocean) have a firm grasp on what they believe, what they want, and why. Self-improvement has much to do with values.

Be the change you wish to see in the world. ~ Mohandas K. Gandhi (paraphrased)

“[Psychologist Albert] Bandura proposed that perceived self-efficacy influences what coping behavior is initiated when an individual is met with stress and challenges, along with determining how much effort will be expended to reach one’s goals and for how long those goals will be pursued (1999). He posited that self-efficacy is a self-sustaining trait; when a person is driven to work through their problems on their own terms, they gain positive experiences that in turn boost their self-efficacy even more,” writes Courtney Ackerman, Ph.D. student at Claremont Graduate University.

“Those with a high level of self-efficacy are not only more likely to succeed, but they are also more likely to bounce back and recover from failure. This is the ability at the heart of resilience, and it is greatly impacted by self-efficacy” she writes.

As a nice summation of this article about self-efficacy on www.PositivePsychology.com, Ackerman counsels that, “If you’re positive that there is no way you could achieve the goal you set for yourself or overcome the obstacle in your path, give yourself a stern but encouraging pep talk (‘You can do it!’). We know that a person’s belief in their own abilities is a strong predictor of motivation, effort expended, and success; there is no downside to encouraging yourself, and working on believing in yourself. As Henry Ford said, ‘Whether you think you can or you can’t, you’re right.’”

If you would like more evidence in the form of quotations, I will bring some to the table. In fact, the Wisdom Archive has so many quotes about values and virtues that I am only presenting those whose author starts with the letter “A”! None could be more salient and succinct than this: “Happiness is that state of consciousness which proceeds from the achievement of one’s values.” ~ Ayn Rand

Always bear in mind that your own resolution to succeed is more important than any other one thing. ~ Abraham Lincoln

It is important to recognize that our achievements not only speak well for us, they speak well for those persons and forces, seen, unseen, and unnoticed, that have been active in our lives. ~ Anne Wilson Schaef

I believe that in life, power comes from concentrating your focus and taking daily action to improve something. ~ Anthony Robbins

I can feel guilty about the past, apprehensive about the future, but only in the present can I act. The ability to be in the present moment is a major component of mental wellness. ~ Abraham Maslow

I owe as much of my success to an uncompromising obstinacy as to any original ideas. ~ Albert Einstein

Success is simple. Do what’s right, the right way, at the right time. ~ Arnold Glasgow

God will not force us to do good. You must choose to do good. ~ Agnes G. Bojaxhiu (Mother Teresa)

I have seen many people die because life for them was not worth living. From this I conclude that the question of life’s meaning is the most urgent question of all. ~ Albert Camus