What is the Point and the Value of Education?

I was reading a piece about the value of education; in other words, what its point is. As the story goes, “As a child, Freddie Sherrill had difficulty learning to read and write, and he began skipping school. As a teen, he became addicted to drugs and alcohol and started breaking into homes. After several stints in prison and rehab, Sherrill became sober in 1988, and rebuilt his life, repairing his relationships with his wife and children, learning how to read and write, and eventually, earning an associate’s degree.” It’s a wonderful story, one that goes a bit deeper. Read on to find out more about Mr. Sherrill and his wonderful story exemplifying the value of education, and why one should ideally engage in the process.

6th/Final Ch. Summary: In Defense of A Liberal Education

Finally, after taking 10,000 words + to summarize and review author and historian Fareed Zakaria’s book, In Defense of A Liberal Education, this is the summary of the final chapter (6). It is entitled “In Defense of Today’s Youth”. It is entitled “In Defense of Today’s Youth”. Much of this impressive book is about critical thinking, the history of liberal education, knowledge (and its benefits). In general, like many before him, Zakaria posits there is a fundamental difference between the teaching and learning of facts such as names, dates, formulae, and vocabulary on the one hand, and the more basic, utilitarian, secular-humanistic, classic, fundamental approach of critical thinking. Indeed, learning to think is a profoundly valuable asset we would do well to inculcate in our children. This last chapter primarily concentrates on how liberal education fits in with the advances and challenges that this new millennium entails – specifically, “youth today”. Ipads, “the Me Generation,” and “the rat race” are explored.

Liberal education is often about individual development and personal growth. In the wonderful, well-researched, short but stout book In Defense of a Liberal Education, noted columnist and historian Fareed Zakaria laments that the humanities are no longer as popular as they were in America’s more prosperous decades. As manufacturing is under severe threat and jobs are increasingly lost to foreign countries or automation, Zakaria maintains that “to succeed today, you need creativity, lateral thinking, communication skills, and, more than anything, the ability to keep learning – precisely the gifts of a liberal education.” In chapter five, entitled “Knowledge and Power”, the author looks at humanity’s progress and connects it to some of the skills that liberal arts education can inculcate in the young. In addition to my summary of the highlights, many quotations relevant to knowledge and progress will be presented. What follows is a summary and review of chapter five of this engaging book.

Liberal Education is About Learning to Think

This is a summary of chapter three of Fareed Zakaria’s book, In Defense of A Liberal Education. It is entitled “Learning to Think.” The main takeaway from this enlightening third chapter of an impressive book is critical thinking. There is a fundamental difference between the teaching and learning of facts such as names, dates, formulae, and vocabulary on the one hand, and the more basic, utilitarian, fundamental approach of critical thinking. Indeed, learning to think is a profoundly valuable asset we would do well to inculcate in our children. To facilitate understanding of this precious outlook on learning and life, I will intersperse this review of chapter three with trenchant quotations by an array of philosophers, psychologists and experts.

Ch. 2 Summary: “In Defense of a Liberal Education”

In my previous posting on historian and political analyst Fareed Zakaria’s book In Defense of a Liberal Education, I introduced the topic, shared how it was that the author came to value a true and deep kind of education, and extolled America’s great history of “an education to all that was not skills-based.” The “Great Books” approach found fertile soil in the United States in the 1930s and in the ensuing few decades. Now, in an era of iPads, Slurpees, and 300-horsepower cars, most students want to study business, psychology, or marketing. Fareed Zakaria and I believe that skills, such as STEM learning, are useful, but that it is not the entirety of what a distinguished and wise strain of thinkers from Socrates on thought was going to make the best, most well-rounded person. In this blog, I will review and summarize chapter two in the book, which is essentially a history and encapsulation of the approach to education known as liberal education/liberal arts. 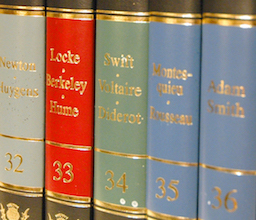 Mortimer J. Adler and Robert Maynard Hutchins were twin engines when it came to popularizing, promulgating, and proselytizing about liberal education, liberal arts, and a broadening of the American mind. Rolling over in their graves at present, these two “men of letters” were prominent, accomplished, and erudite individuals who wanted the best for the populace. Seemingly half-Ancient Greek, half Carolingian, half-pre-war American, these blue bloods are now reminiscent of a by-gone era. Happily, they were prolific and outspoken, so we have plenty of  books and quotations about liberal education from these gentlemen (they were as genteel and classical as two can be). They remind me of Mr. Keating, the inimitable professor from the movie Dead Poet’s Society. Perhaps less enthusiastic, but equally passionate about true learning – not just for some profession or to prevail on some standardized test. I present you with a little biographical sketch, a few representative quotes, and links to The Wisdom Archive, where you may search for free and learn more about what quotations about liberal education are in the collection. Put on your thinking cap and get out your pipe!

If you are looking for philosophical quotes, one excellent exponent is man of letters, Mortimer J. Adler. Though he has since shuffled off of this mortal coil, in his lifetime he was a dedicated and passionate voice for “the great ideas” (he and fellow intellectual Robert Maynard Hutchins pioneered the Great Books of the Western World series). A defender of rationality, rational inquiry, applied philosophy, the search for wisdom, and liberal education, he wrote and taught and was essentially “a public philosopher.” I recently read his book How to Think About The Great Ideas, essentially a snapshot of his general approach found here. In it were conversations in which many interesting philosophical quotes could be found. I will share a few in this blog and direct the interested reader to learn about Adler and public philosophy by seeing what quotations of his are housed in The Wisdom Archive, right here on Values of the Wise.