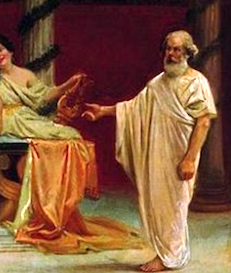 Euthyphro says, “I say that the pious is to do what I am doing now…not to prosecute is impious” and “…what is dear to the gods is pious…”.  The subject of the discussion that day was nothing less than the very nature of piety, morality, goodness, and law. That was Socrates’ gig; he questioned anyone and everyone, and the more the person thought they knew, the better. They called him “the Gadfly” (i.e., a horsefly) for the way he bothered the rich and poor, the powerful and the common, in the Athenian marketplace.

The question at hand is, What distinction is Socrates making when he asks: “Is the pious loved by the gods because it is pious, or is it pious because it is being loved by the gods?” (page 10a). He is asking if piety (holiness, propriety, and godly behavior) is something the Greek gods basically created for man to love or not, or if the gods themselves value piety and similar values.

Again, this regards the nature of values according to Socrates. How do these values gain their authority and power? Why do we love justice, beauty, truth, goodness, honor, and the rest – because the gods created those very values, or do the gods themselves see the highness and authority of these superordinate values and virtues?

Socrates is feigning ignorance and laying bare the lack of wisdom of his interlocutor, Euthyphro. He is asking whether law, goodness, morality, piety and such values are a) god-given, on the one hand, or if in fact b) the ancient Greek gods recognize and acknowledge the superiority, primacy, and universality of values and virtues because it is superordinate to them. Is something right because it is right or because one or more gods believe it to be so?

It is my belief that piety and other values which I regard more highly (morality and goodness, for example) exist by the very nature of the universe (e.g., like gravity exists) and the gods are wise to accept truth. Growth will always be considered better than death; kindness better than cruelty; love better than apathy. That’s just how the world works.

If the moral law within a human being is not a gift bestowed (or a commandment issued) by a supernatural being, but simply inherent in the universe, it is significant (for wisdom and for Socrates’ very life, because he is about to be found guilty and put to death). What Socrates definitely wants to impart to Euthyphro is that one can’t define a value by resorting to what one (or a group) thinks a god or gods believe it to be. “Socrates insists that merely citing an instance, or a list of instances (rather than giving a general formula, or description) is inadequate,” writes S. Marc Cohen.

This type of humanism has ramifications for theology, humanism, and ethics as well. I mean to say if piety and other values and virtues exist, independent of any god or culture, a god/s existence is not necessary for the legitimacy of human values like justice (i.e. we are talking about an atheistic view of the universe). Also, the way in which human beings determine and believe and argue about issues such as ethics will be affected depending on whether capricious and fractious gods are the purveyors of it, or if humans are capable of determining ethical behavior without reliance on and reference to god/gods.

Socrates was a believer in a god (yes, “a god”), and the nature of values according to Socrates is that they exist here on earth, regardless of what the many, varied Greek gods think. As Cohen puts it, “If the gods love something because it is pious, then its being pious must be something independent of their loving it – something independent of opinion – something objective.” I like this idea of the nature of values according to Socrates being somewhat objective, independent of opinion, and not merely demonstrable by showing an example of it here on earth.

Is it difficult to define and fully grasp the nature of lofty values and virtues such as truth, beauty, justice, honor, love, passion, care, generosity, and mercy? Absolutely. That is one of the reasons I spent so much time (and money) researching and collating opinions on what values really are, because one can’t easily define them, and surveying one person for the gist makes a misunderstanding very likely.

S. Marc Cohen lists six criteria, which I might call the nature of values according to Socrates:

beauty definitions of values Euthyphro goodness love Socratic dialogue socratic wisdom the nature of values according to Socrates the trial of Socrates truth values wisdom
Wisdom Is Ever-Ready to Guide Us From Here
Reason and Emotion: Integrating Passion and Intellect